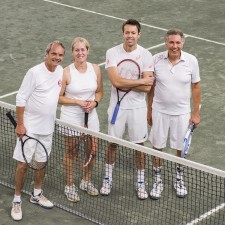 A wonderful event took place on Friday November 13th, 2015 at The Queens Club in Toronto. The Queens Club hosted Daniel Nestor presented by the Cross Financial Group at CIBC Wood Gundy to a four hour marathon of tennis. The afternoon started with lucky bidding winners playing a Doubles Super Tie Breaker with the luckiest player having Daniel as their partner. Then players of all ages (the youngest being 5 years old) got to play with and against Daniel. Gator Parent led the players in a series of fun filled games which allowed everyone to feel like a winner. While some of the older players got to relax and enjoy tasting Daniel’s Matchpoint wine and Henry of Pelham’s Chardonnay, four exceptional juniors participated in a tennis match that showcased their terrific talent. We knew we were watching the Canadian tennis stars of the future. The tennis marathon ended with three pros, including the pros from The Queens Club, playing a very spirited Doubles Pro Set. We all got to have a bird’s eye view of some very fine tennis.

A delicious dinner followed along with an opportunity for a personal photograph with Daniel Nestor and a signed oversized tennis ball. Kayla Cross, a 10 year old exceptional tennis player, presented the Philpott charity with a brand new Bobolat tennis racquet and carry bag. Kayla won this racquet and bag at a weeklong tournament in Florida and was told not to keep the racquet but to play it forward to another child who would not have the opportunity to buy new equipment. (For more on this story, see the Kayla Cross article on the Philpott website at www.philpottchildrenstennis.ca )

After dinner Coulter Wright, Board Chair of the Doug Philpott Inner City Children’s Tennis Fund accepted a cheque for $10,000 from CIBC for Children’s Miracle Day and Daniel and Natasha Nestor. A question and answer period followed with Gator directing some very challenging questions at Daniel, which Daniel answered with thoughtfulness and charm.   A huge thank you to Daniel and Natasha Nestor, to the Cross Financial Group at CIBC Wood Gundy, to Gator Parent and The Queens Club, to Kim Lowes the photographer who recorded the evening (for photos go to the Philpott website at www.philpottchildrenstennis.ca ) and all the other people who organized and supported this most successful event.  The Philpott Board of Directors and most especially the Philpott children say a big thank you.