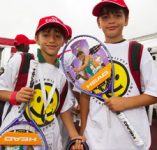 August 9, 2006 – Children from the Doug Philpott Inner-City Children’s Tennis Fund got their chance to play tennis with the stars on Wednesday at the Rogers Cup presented by American Express.

Over 100 children were bussed by Tennis Canada to Rexall Centre to participate in a tennis clinic with Canadian ATP stars Philip Bester (Vancouver) and Rob Steckley (Toronto), as well as veteran George Bastl (Switzerland). As part of their day, the kids were also treated to lunch and given tickets to watch the day’s matches.

“It’s a big thrill for the kids to see the pros here [at the clinic] and get a chance to watch them on centre court,” said Beth Dea, Program Manager for the charity. “It’s something they normally would never get a chance to do without the help of Tennis Canada.”

The Doug Philpott Fund is a children’s charity that offers free summer tennis camps for inner-city kids. The only charity in Canada dedicated to children and tennis, it has been in operation since 1981 and now has a total of 10 locations spread out in the Jane and Finch area, the downtown core, and Scarborough.