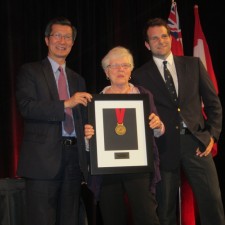 The Philpott Board of Directors is pleased to announce that Sharon Arnold, a founding Philpott Board member is one of this year’s recipients of the Syl Apps Volunteer Achievement Award.

Syl Apps was a Canadian pole-vault champion, a member of the 1936 Canadian Olympic team, and a star centre and captain for the Toronto Maple leafs. In 1947, Apps was appointed as Ontario’s Athletic Commissioner and later sat in the Ontario Legislature. He was a life-long campaigner for Ontario’s young people and healthy living.

The Syl Apps Volunteer Achievement Award recognizes volunteers, nominated by Provincial Sports Organizations that have made an outstanding contribution to the establishment and /or ongoing development of groups, clubs, facilities, projects and/or special programs in the Province of Ontario.

Sharon Arnold is a founding Board Member of the Philpott Children’s Tennis Fund and presently serves on the Philpott Board and is Chair of the Program Committee, which oversees the summer tennis program. She has been a Canadian Open volunteer for many years and holder of the Tennis Canada Distinguished Service Award. She has served in numerous capacities on the OTA (OLTA) Council (now Board of Directors), holding positions of Secretary, Treasurer and Education Committee Chair over a period of 20 years during the 1960’s until the 1980’s. As Education Committee Chair she developed the first teaching manuals for use by physical education teachers and promoted tennis instruction in schools.