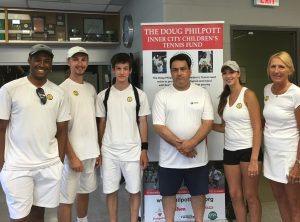 Saturday July 9th was a Wimbledon celebration for the members of the Leaside Tennis Club. This fun filled day, which was held in support of the Doug Philpott Inner City Children’s Tennis program, included four Philpott tennis instructors. The instructors joined the Leaside TC members for several rounds of round robin play. There was something for everyone including strawberry shortcake courtesy of Pat Hynes and some terrific silent auction items. Everyone was a winner; the players and most especially the Philpott campers who are the ultimate beneficiaries of this fundraising event. Many thanks to organizers Tony Oliveira and Rita Lee, Leaside Head Pro Ryan Chow and Club Supervisor Jamie Tinkler, to the Philpott instructors and to all the Leaside Tennis Club members.