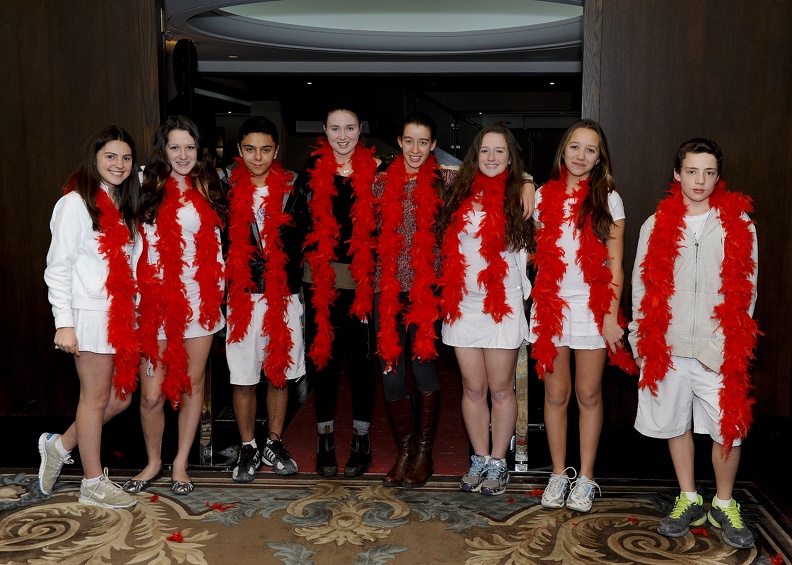 The Granite Club is proud to announce that the 29th Annual Ladies Invitational Tournament in support of the Doug Philpott Inner City Children’s Tennis Fund was an Oscar Award winning performance!  This two-day tournament and banquet, held January 23-24, 2013, was attended by over 250 tennis enthusiasts and Philpott supporters.

With Timm Fisher, the Head Pro at the Granite Club, as the host of the Gala themed “Oscars, this event raised over $80,000 for Toronto’s inner city children.  It takes only $25 to send a child to camp for a week, so this event will give almost 3,200 children a chance to try tennis and to keep busy this summer. This is huge for us, for the charity and ultimately for the children. A big thank you goes out to the tireless work of the Granite Club Philpott Ladies committee. Aided by Granite staff Timm Fisher and Melissa Weston and headed by Margaret Isberg, the committee consisted of Kristi Herold, Kelly de Regt, Rita Shefsky, Sandy Bohl, Carolyne Fowler, Linda Glover, Louise Sugar, Di Grand, Marilyn Short, Eva MacDonald, Melanie Lewis and Doriana Zohil.

This year there were 10 divisions of competition, with four teams per division for a total of 40 teams. Thank you for the court time at the following clubs: The Granite Club, The Cricket Club, The Toronto Lawn, The Boulevard Club, The Badminton and Racquet Club, The Donalda Club and York Racquets. The rivalry was fierce but fun, because at the end of the day, everyone realized they were part of something much bigger than a two day tennis tournament. They were providing opportunities for children to play tennis in areas of the city where tennis lessons were unheard of, before the arrival of the Philpott camps. They were giving back to a sport they love by making it possible for Philpott to continue and expand. First and foremost, they were supporting the Philpott children.

Thursday night was the award winning Gala. A very glamorous group of Ladies gathered to sip Prosecco, walk the red carpet, meet and greet opponents and friends, enjoy a delicious dinner, laugh until they hurt at the antics of Timm and Eva, bid on some astonishingly fabulous live auction items and electronically bid on over 100 silent auction items. From tennis lessons, to get away holidays, to sports events, to beauty, apparel and more, there was something for everyone! Cary Weingust shared a message from the Philpott Board of Directors, bringing us up to date on the Philpott program 2012. Armin Milani, the Supervisor for the summer program, gave us a heartfelt message conveying the importance of Philpott tennis in the lives of the children we serve. This message was visually portrayed by an accompanying slideshow, produced by Nicole Olds.

In 2013, the Philpott Children’s Fund will be providing 16 tennis camps to over 7,000 inner city children in Toronto’s priority needs neighbourhoods, offering them a fun, challenging alternative to summer inactivity.  Through the generosity of donors and partners, qualified instructors help Philpott Kids learn more than tennis – they learn valuable lessons about physical fitness, leadership, cooperation, discipline and self-confidence. This year the Ladies Philpott Invitational tournament and Red Carpet Affair raised enough money to cover the cost of over a third of the campers in Philpott program.