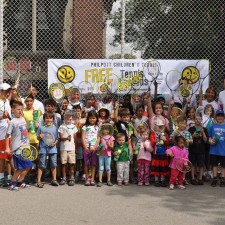 Tuesday July 30th was a very special day for the Philpott campers at the Parkdale site. Fifty children gathered with Paul Cairns, Head Pro from the Boulevard Club and Coulter Wright, Chair of the Philpott Board. Together Paul and Coulter brought huge smiles to the faces of the campers as they presented each child with a brand new tennis racquet and a can of balls. The racquets were a gift from Yuri Mykolyk (he purchased a 100 racquets in total for the Philpott children). The balls were from Laura McCain and Peter Jensen. Five hundred racquets were collected through the Philpott racquet donation program and each child in the Philpott program, who received their own racquet this summer, were also given a can of balls. These amazingly generous gifts were very gratefully received by the children. As soon as the celebrations were over, the children rushed onto the courts to try out their new tennis equipment. They continually asked “is this really mine to keep?”.

Thank you to Paul Cairns and the Boulevard Club, to Yuri Mykolyk, to Laura McCain and Peter Jensen for enabling us to put such huge smiles on the faces of the Philpott children. It is wonderful to know that the children will be able to continue to play tennis, long after the lessons are over.