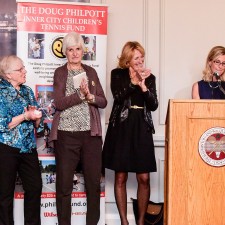 With Tom Kern, Head Tennis Professional at the Toronto Badminton and Racquet Club as host of the Gala themed “Tennis and The City”, this event raised a large amount of money for Toronto’s priority needs children. It takes only $25 to send a child to camp for a week, so this event will give even more children a chance to try tennis and to keep busy this summer. This is huge for the charity and ultimately for the children. A big thank you goes out to the hard work of the Toronto Badminton and Racquet Club staff and the Philpott Ladies Invitational committee. The committee, under the tireless co-leadership of Honor McLachlin and Lynne Griffin-Elliott, consisted of Babs Topping, Robin Strachan and Linda Syron, a small but mighty group.

This year there were 9 divisions of competition, with four teams per division for a total of 36 teams. Thank you to the following clubs for providing court time and refreshments for the tournament: The Granite Club, The Cricket Club, The Toronto Lawn Tennis Club, The Boulevard Club, Lambton Golf and Country Club, The Badminton and Racquet Club, The Donalda Club and York Racquets. The rivalry was fierce but fun, because at the end of the day, everyone realized they were part of something much bigger than a two day tennis tournament. They were providing opportunities for children to play tennis in areas of the city where tennis lessons were unheard of. They were giving back to a sport they love by making it possible for Philpott to expand and welcome a growing number of children into the program.

Thursday night was the Tennis and the City Gala featuring New York City. The gala was a time to meet and greet opponents and friends, enjoy a variety of food from a number of food stations and bid on some fabulous silent auction items. Stephanie Smyth who leads the CP24 Breaking News Desk was an entertaining tennis playing MC. Jennifer Bishop, newly appointed chair of the Philpott charity brought greetings from the Philpott Board of Directors, thanking Tom, the Philpott Ladies Invitational organizing committee and the Toronto Badminton and Racquet Club for hosting such a fabulous event. The high point of the evening included live auction items which consisted of an all-expense paid trip to New York City and tickets to the 2016 US Open Tennis tournament and tickets to the final session of the 2016 Rogers Cup. All the fun and excitement of the evening was captured by photographer Kim Lowes.

In 2016, the Philpott Children’s Fund will be providing 19 tennis camps to over 8,500 inner city children in Toronto’s priority needs neighbourhoods, offering them a fun, challenging alternative to summer inactivity. Through the generosity of donors and partners, qualified instructors help Philpott Kids learn more than tennis – they learn valuable lessons about physical fitness, leadership, cooperation, discipline and self-confidence.