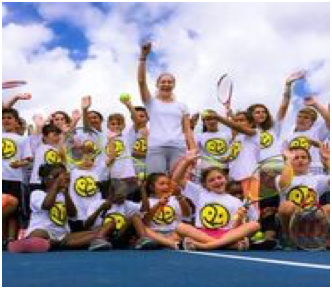 A visit to the Aviva Centre for the Rogers Cup tennis tournament is a summer highlight for most Toronto tennis players and for the campers enrolled in the Philpott Children’s Inner-City Tennis program, it is a life time experience. On Tuesday August 11th over 100 children from three Philpott sites, arrived at the Aviva Centre at York University for a fun filled day.
While the Doug Philpott Inner-City Children’s Tennis Fund holds free tennis lessons at 18 sites, the children are chosen from 3 different sites each year. This way a variety of children will have the chance to attend the Rogers Cup. This year the children came from San Romanoway Revitalization Association, Cabbagetown Youth Centre and the Dovercourt Boys and Girls Club. The children were accompanied by instructors from each site, the three Philpott supervisors and several Philpott Board members.
Prior to arrival at the Rogers Cup, the children were given Philpott happy face tee shirts which they wore throughout the day. At the entrance gate, representatives from Tennis Canada and Emirates Airline were on hand to welcome the groups. After a brief walk about the grounds, tasting the free samples and playing some of the tennis challenges, the children were escorted onto a tennis court where Gaetan “Gator” Parent led the groups through a series of games. Both Elena Vesnina and Ekaterina Makarova made guest appearances and Ekaterina even stayed on the court to play games with the children.
Then the almost perfect day got even better when Don McWilliam, Canadian Manager, Emirates Airline welcomed the children and presented them each with a gift. Each child was given a junior tennis racquet and an Emirates goodie backpack. The children were amazed to be told that the racquet was a gift from Emirates and it was theirs to keep.
With brand new racquets in hand, it was off to centre court to watch a professional tennis match between Victoria Azarenka versus Elina Svitolina. At lunchtime Tennis Canada provided a VIP area at the Tie Breakers restaurant for the children to enjoy a delicious lunch. Then it was off to the centre court again to watch their idol Serena Williams play and win a second round match against Flavia Pennetta.
Due to the generosity of Emirates Airline and Tennis Canada, the Philpott campers had a perfect day. Many thanks to Nicole Olds the photographer who chronicled the day, our Philpott supervisors Chris, Ricky and Jonathan, our Philpott Board members Coulter, Sharon and Eleanor, and to JJ Davis and Shankar Mani from Tennis Canada who were there throughout the day to support the occasion. For everyone involved and most especially for the Philpott children, it was a perfect day. Thank you!